DOES CANADA GOOSE BELONG IN MINNESOTA?

As Minnesota is slowly moving towards a ban on fur products, trapping and wildlife killing contests, the Mall of America has welcomed winter clothing manufacturer Canada Goose. Canada Goose sells coyote fur-trimmed parkas and according to Trapping Today's 2020 Report on the fur market: 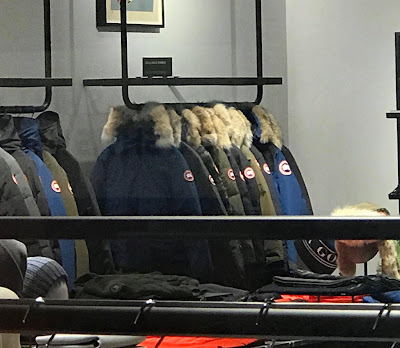 "The coyote market has been the one exception to the low fur market the past several years. The success of Canada goose and their high end parkas trimmed with coyote fur has been the sole driver of coyote prices, and this should continue into the upcoming fur season."

The fur market is slowly dying, as you'll see in Trapping Today's opening report, but companies like Canada Goose are helping to keep it alive. Doesn't the existence of this company in our state contradict Minnesotan values?

Across the state individuals and organizations are pushing to end trapping and wildlife killing contests. Just this month, on January 8, the city council in St. Paul passed an ordinance banning killing contests saying that they:

"encourage the indiscriminate killing of wildlife for cash or prizes because they glorify killing for its own sake and do not reflect Minnesotan's human values."

On Friday, January 17, the Minneapolis city council introduced an ordinance to:

"prohibit the sale and manufacture of new animal fur products such as clothing and accessories in the city of Minneapolis."

Last month the Center for Biological Diversity sent an intent to sue letter to the Minnesota Department of Natural Resources over the trapping of Lynx who are protected under the Endangered Species Act. They want the state to ban a type of trap called a snare and require devices on conibear traps to protect lynx.

The lawsuits to modify traps or end trapping are not new.  In 2009 The Animal Protection Institute filed a lawsuit to force the state of Minnesota to abide by the Federal Endangered Species Act also. At that time it was over incidental catches of endangered wildlife like eagles and lynx.

So what is new? Awareness.  More and more Minnesotans are becoming aware of the atrocities committed against wildlife thanks to the internet, organizations like Wolf Patrol, Minnesota Humane Society, Center for Biological Diversity, Howling for Wolves, Project Coyote... and the many people that volunteer for those groups, meet with their state legislators, attend rallies, etc...

It won't be long before that awareness leads to a ban of trapping, wildlife killing contests and the sale of fur products in the state of Minnesota. If we make that happen we won't have to worry about companies like Canada Goose because they won't be welcomed here and the skin off our wildlife won't be contributing to their net profit.