WHO IS STEVE PORTER AND WHY SHOULD WE CARE?

The Minnesota Sportsmen's show is currently going on.  It is their 50th annual event. If you are unfamiliar with what it is, it's a place to check out boats, high end camping equipment like RV's, outdoor and hunting equipment, etc... It is a pretty popular event in Minnesota and this year it's attracting some controversy. Why? Because The Saint Paul River Center and Xcel Energy Center, where the show is being held, may be allowing illegal deer to be shown at the event. Why are the deer illegal? Because the DNR said they are.

After a growing number of deer tested positive for Chronic Wasting Disease in Minnesota, the Department of Natural Resources issued "an emergency rule that temporarily prohibits the movement of ALL farmed deer within the state." The reason for this action by the DNR is to "reduce further spread of chronic wasting disease and protect Minnesota's wild deer."

The latest discoveries of CWD were on Minnesota deer farms so to contain the deer while they investigate, the DNR has ordered a temporary ban on deer movement.  The decision by the DNR was NOT PERMANENT, it was TEMPORARY, set to end on Jan. 29, and yet at least one Minnesota deer farmer turned his nose up at the order and that person is Steve Porter.

According to an article in the Minneapolis Star Tribune, Former Kittson County Sheriff Steve Porter, a prominent Minnesota deer farmer, says "he'll keep his commitment to show three monster bucks at the Minnesota Sportsmen's Show." In the article he also made it clear he is aware of the temporary ban by the DNR and said he'll fight the misdemeanor charge he received after he brought his deer to the show.  The shows manager, Barry Cenaiko, didn't want to comment for the Star Tribune article. Maybe because he's been busy promoting Porter's bucks.

So who is Steve Porter? Have we heard from him before? Of course we have.  Steve Porter is the man who made a 10 minute video for Facebook back in 2017 about how wolves were killing a bunch of cattle in Kittson county and how he felt the only solution to this problem was for there to be a wolf hunting and trapping season. In the video he talks about how he is taking advantage of an obscure law that allows sheriffs to investigate livestock depredation and determine whether or not they are caused by wolves so that farmers can be financially reimbursed for the loss.

Here is his anti wolf propaganda video he made in 2017. It was originally posted on the Kittson County Sheriff's Facebook page but has since been deleted.


At the 3:45 mark Porter is discussing with his deputy the number of calves dying of natural causes vs. those being killed by wolves and he also references a bunch of missing calves, suggesting they were all taken away by wolves. Then at the 6:40 mark Steve Porter asks his deputy "where do we rank in the state for wolf problems?" His deputy answers "as far as wolves trapped in the state, Kittson county ranks #2, as far as cattle or calves killed by wolves I believe the number we're ranking is #1."

The state and federal wildlife agencies disagree with him. 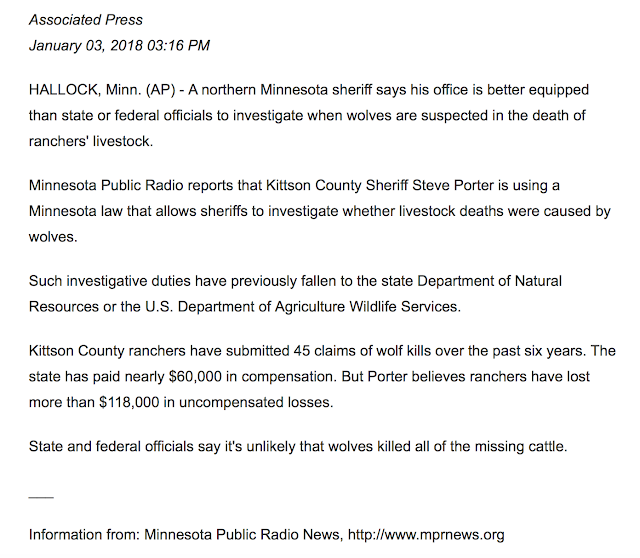 In the video starting at the 8:00 mark Steve Porter criticizes the federal government for protecting wolves while he praises the DNR saying that they should be allowed to regulate wolves because they do a good job but now that the DNR is creating rules to stop the spread of CWD and those rules directly impact his business he calls them "a rogue agency acting outside of its authority" (Star Tribune, Jan 10, 2020)

There's a lot that can be said about that Steve Porter video like why doesn't he ever mention the non-lethal methods farmer's used to protect their livestock?  Did he ever suggest non-lethal methods to those that had losses? How did he determine a wolf kill vs a calf being fed on after dying of natural causes? Lots of questions that were also asked back in 2017 on Facebook but were never answered. One question that didn't get asked because no one knew to ask it was about Steve Porter raising trophy bucks for canned hunting (See definition of canned hunting HERE if you are not familiar with the term.) In the Star Tribune article it says he's raised trophy bucks for 15 years. None of that was ever mentioned in his wolf video. Here is what his son had to say about some fencing his dad installed on their property to protect their bucks (and just to correct some of what his son said in other parts of the linked interview, wolves eat an average of 15-20 deer per year and they don't actually eat every day so if we had 2,000 wolves that would actually be 40,000 deer eaten in a yr if each wolf ate 20 deer per year. It would not be 52,000-142,000 deer like his son claimed. MORE WOLF FACTS HERE. Also, in 2017 when this interview happened we did not have 600,000 deer, we had an estimated 900,000 deer. Numerous reports, including by the DNR, showed deer harvest up at the time of his son's interview. (HERE FOR ARTICLE SHOWING DEER HARVEST INCREASE).

So the state of Minnesota allows a person who had his own personal business losses from wolf depredation to determine whether other farmer's in his area are losing cattle to wolves. Was there no concern about bias here?

1. Did Steve Porter ever have any loss of deer on his farm after the 2010 law went into effect giving him the authority to investigate?
2. If he had losses during his time as sheriff and post 2010 were they to a wolf and if so who confirmed it?
3. If there were any confirmed losses to a wolf post 2010 was he reimbursed by the state?

The Public Trust Doctrine asserts that "wildlife is a public resource, and therefore should be managed by governmental trustees as a public trust for the benefit of all people." This means WOLVES must be managed for the benefit of ALL people, not just livestock owners. And for the public to know wolves are being managed appropriately we need access to all livestock depredation investigation data. So where is it? Who got paid what amount and for how many losses?

The only data available on livestock depredation comes from the USDA back in 2015.  You can access it HERE. The Humane Society of the United States analyzed the information and determined "In the United States, data shows that wolves kill few cattle and sheep." 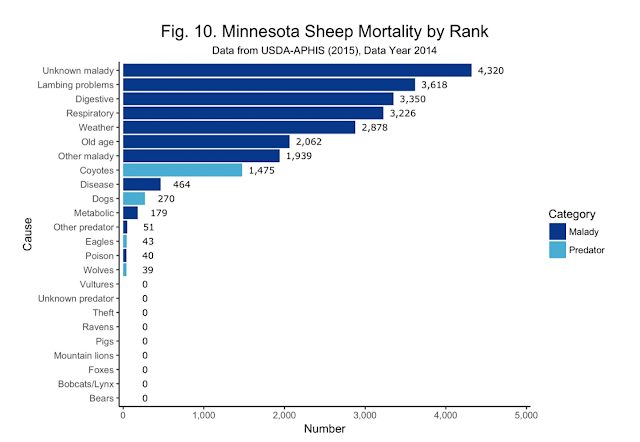 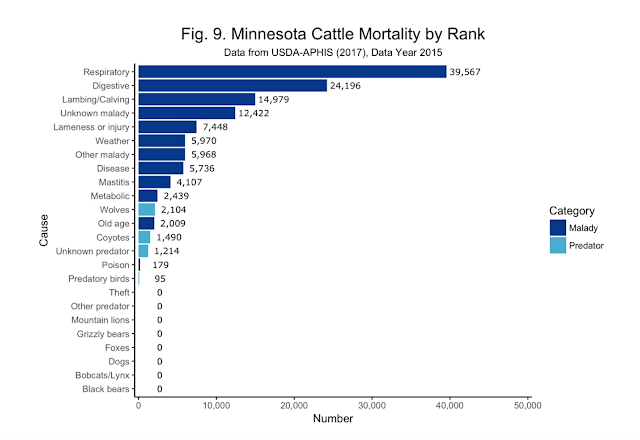 I guess we'll never get the answers to all those questions above but what we'll soon find out is if the Minnesota DNR is willing to make an example out of Steve Porter in order to protect Minnesota's wild deer because as of right now Steve Porter, the former man of the "law," is gearing up to fight the law that says he can't move his deer til Jan. 29.  He currently has a GoFundMe to raise money for his cause which is to keep deer farmers in business.

Let's take a look at what deer farms are and what problems they can cause.

In the state of Minnesota farmed cervid, in the case of Steve Porter that would be deer, are considered livestock and are not considered wild animals for the purpose of game farm, hunting or wildlife laws.

The following is taken from the Wildlife Society:

What do deer farmers do?
Captive cervid breeders use "artificial breeding to produce larger animals for meat production and males with large antlers and sell semen, impregnated does, and live animals to other cervid farming operations or captive shooting facilities for profit. The latter facilities promote situations in which clients pay for guaranteed kills under non-fair chase conditions in small, enclosed "hunting" areas that may contain only a single target animal or contain an artificially high density of deer."

Why are deer farms a problem?
"Infectious diseases are a concern whenever animals are maintained at high densities due to increased sufficiency of pathogen transmission. Disease transmission between between captive animals and wild populations is a documented and growing concern. Captive operations commonly involve transport of cervids throughout North America, increasing the risk of disease transmission within and among states and provinces. Captive operations routinely experience escapement, wild animals entering private enclosures, or both. Pathogens may also be transmitted from captive to wild deer through fence to fence contact. As a result of these and other opportunities for transmission, diseases such as chronic wasting disease (CWD) and bovine tuberculosis (TB), have become more widespread among captive cervid facilities and in wild populations across North America."

Steve Porter said this regarding the transport of his deer to the Sportsmen's Show:

But if the DNR makes an exception for one they'd have to make an exception for all and it would completely contradict the purpose of the emergency order.
Actually, the Board of Animal Health regulates captive deer and elk in the state and the DNR responds to and manages wild deer and elk.  There are regulations in place to contain disease in farmed and wild animals and since the Board of Animal Health chose to protect farmers at the expense of wild deer the DNR had the legal authority to step in.  Whether this all will lead to a permanent ban on movement of deer will have to be addressed by the state legislature and quite frankly those of us here at Minnesota Wildlife think there should be.  Better yet, since CWD positive animals have been found on eight deer and elk farms since 2002 we think a permanent closure of all deer and elk farms would be the best solution. Clearly a temporary ban on movement and a misdemeanor charge hasn't stopped at least one farmer from doing whatever he pleases.

Now we just have to stay tuned to see how this plays out.