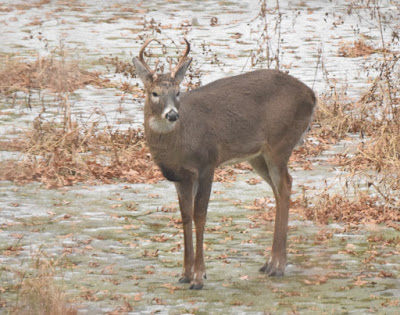 Lately there are reports about this winter being hard on deer and then yesterday this video surfaced on social media showing a large number of deer gathered in one area of Two Harbors (Northeastern MN) so it seemed an appropriate time to re-share this article from Barry Babcock (read below video).

(Article below originally written by Barry Babcock in 2017)
As someone who has hunted deer for over a half century; for the most part, deer hunting is no longer recognizable to me anymore...its become a consumptive market place cog in the economy - not an opportunity to return to nature and and enjoy the great outdoors:

I have written and spoken so many times about the transformation of hunting and hunters that I feel like a broken record but a recent article in the Duluth News Tribune by Sam Cook on a DNR deer management listening session has resurfaced the ignorance and consumptive mentality of a broad spectrum of hunters. Though the wolf is still in their cross hairs, its a lot more too! http://www.inforum.com/…/4224385-duluth-group-sounds-about-…

Here are some of the comments:
"If you want the plan to fly, you're going to have to address the predator problem," said Duluth taxidermist and deer hunter Randy Bowe. By predators, he meant gray wolves (now under the protection of the federal Endangered Species Act), bears, coyotes and bobcats, he said."

"It seems like every time we bring up wolves, they (DNR officials) change the subject," said Al Vorderbruggen of Lakewood Township. Steve Merchant, DNR wildlife populations manager, assured those in attendance Wednesday evening that the agency is working with Minnesota's congressional delegation to get wolves delisted — again. "We're not sitting by idly," Merchant said.

"They're probably a little more exposed to that than folks in, say, Rochester," Murkowski said.

"They're interested in making sure the plan encompasses everything that affects deer. It's not just the wolf preying on adult deer. There's a suite of predators in the north woods. Black bears prey on fawns."

Long, long ago, there was a time when deer hunting was a lot tougher than it is now. In the 1960's through the 1970's the deer herd averaged no more than 12 per square mile. Winters were tougher back then and it was these winters that were the primary limiting factor on deer. Hunters worked hard to get a deer, understood the life ways of a deer, walked rather than rode ATV's, and didn't expect any guarantee that a deer would be assured for them. Now there are up to and in some cases more than 30 deer per square mile, many or most hunters will not exert themselves physically, spend more time in Cabala's than in the woods, have no conception of the interconnectedness of all life in the forest, most cannot get to their starter castle tree stands unless they ride a ATV, and some damn near expect their deer to tied up for them.

Let me emphatically state this: we are in the golden age of deer hunting! There are not only more deer in MN than ever, there are more deer in the eastern USA than ever before! Yes, predators like the wolf and bear kill deer, and so it has always been. It's all part of the complicated and interconnected web of life. These same predators have made the deer and other prey savvy and elusive....qualities formerly admired by the hunter. These modern day ATV riding hunters with their $1000 scopes, starter-castle tree stands, cut shooting lanes and catalog equipped outfits of stylish clothing should go to Texas where they can participate in a "canned hunt" while eating pizza and watching the Super Bowl on satellite TV.

I am often stupefied that MN DNR Wildlife managers would depict these groups as "clients" and allow these hysterical and false rants go unchallenged. It is not the job of the MN DNR to make GAME FARMS out of the northwoods!! We now have healthy ecosystems with the recovery of the wolf. Bears are doing well and so are many other predators and the primary reason for this is an over abundant deer herd....lots of deer meat out there!

In so much of what is going on around me seems fueled by fallacies, untruths, and fairy tales and this includes our law makers too!

~Barry Babcock
Author of Teacher's in the Forest, local historian, and wolf advocate featured in the documentary Medicine of the Wolf.  Barry is a long-time deer hunter who lives off-grid in the Mississippi Headwaters Country of northern Minnesota.