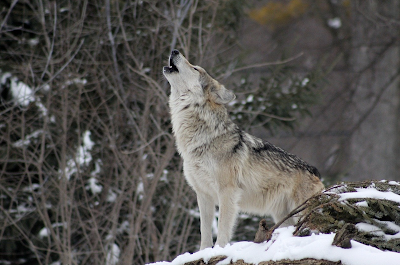 Columnist Dennis Anderson has written another wolf article for the Star Tribune, this time titled "Minnesota's path isn't so clear after wolves become delisted." As usual Anderson's piece has a pro delisting slant with his opinion being passed off as fact in the very first paragraph.

Let's look at what he says.

"Within a couple of weeks, the U.S. Fish and Wildlife Service is expected to once again remove the gray wolf from federal protection under the Endangered Species Act. In most similar cases, this action would be considered definitive and conclusive. Not so with wolves.

That's because, notwithstanding the science and, many would argue, common sense upon which the service's delisting is founded, lawsuits from those opposing delisting - among them the Center for Biological Diversity headquartered in Arizona - are likely, if not guaranteed."

The underlined portion is absolutely NOT true!

What does the science say about wolf delisting?

In 2014 this is what the science said about gray wolf delisting. Taken from the Society of Conservation Biology. "An independent panel of experts, commissioned by the US Fish and Wildlife Service (FWS) to review the FWS's proposed rule to delist the gray wolf, has found that the proposal is not based on "best available science."

The report is HERE

In 2019 this is what the science said about gray wolf delisting. Taken from the Union of Concerned Scientists.

"According to a five-member peer-review panel, the administration's proposal to delist the endangered gray wolf (Canis lupus) from the Endangered Species Act (ESA) is half full of scientific errors that misrepresent the scientific consensus regarding wolf conservation and taxonomy. One member of the panel even said that the proposed rule seems as if it were written with a predetermined conclusion to delist the endangered gray wolf, and then the administration cherry picked evidence they thought supported their conclusion."

The report is HERE

I'll focus on the most recent peer review of the proposed USFWS delisting plan. This is how reviewers were selected: 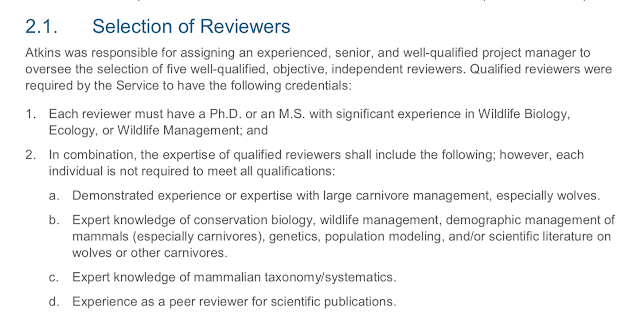 Each reviewers name and extensive credentials are listed in the report. Quoted below is some of what they had to say. Refer to the report in its entirety for all of their comments and concerns.

"I found that the proposed rule did not build on the assembled scientific information to provide coherent factual support or logical explanation for the agency's conclusions."

"There are areas that need clarification, additional important literature that can be cited, and taxonomical treatment of wolves seems somewhat arbitrary."

"The best available data were not always used."

"Data were sometimes attributed to the wrong study."

Below you will find links to several letters written over the years from various scientists objecting to wolf delisting:

Feb. 2017 - An Open Letter to Members of Congress and the White House from Scientists and Scholars on Federal Wolf Delisting and Congressional Intervention on Individual Species...

May 2019 - An open letter to the U.S. Fish and Wildlife Service from Scientists and Scholars on Federal Wolf Delisting in the contest of the U.S. Endangered Species Act.  More than 100 Scientists Oppose Removing Federal Protections for Gray Wolves.

"What roles, ultimately, Walz's opinions will play in the renewal or not of Minnesota wolf hunting and trapping seasons is unclear. What is clearer is that if Walz stands in the way of those seasons next year, barring a court injunction that stalls the delisting, he will do so at considerable political risk, while also possibly inviting a lawsuit against the state."

What political risks is he talking about?

Keep in mind this survey was from 21 years ago.

"A substantial proportion (a MAJORITY of non-northern residents and NEARLY 50% of northern residents) REMAIN ETHICALLY OPPOSED to harvesting wolves for fur or sport, and fear a legal harvest would result in excessive and unsustainable numbers of wolves being killed."

In 2012 the Minnesota Dept. of Natural Resources (DNR) did not provide formal public notice and an opportunity to comment on their plan to have a wolf hunting and trapping season, instead they only offered an online survey. Even then nearly 80% of those who responded to the survey said they opposed a wolf hunt.

In 2013 Howling for Wolves commissioned Washington D.C. based Lake Research Partners to conduct a statewide survey of 600 registered Minnesota voters and the results showed two-thirds of those polled did not see any reason for a wolf hunt and only 25% said a wolf hunt was necessary.  Of those surveyed 66% also said they opposed the use of traps, snares and bait to hunt and trap wolves.

In 2019 1.8 million Americans wrote in to oppose the Trump administrations plan to strip endangered species protections from gray wolves.

As you can see over the years human tolerance of wolves continues to increase and the majority of Minnesotans do not want wolves hunted or trapped. So if there is any political blow-back for  Governor Tim Walz it will come from those who oppose wolf hunting and trapping should he make the mistake of allowing another wolf season.

As Anderson begins to conclude his article he slips in a tidbit about deer numbers and wolves.

He says this deer hunters believe that wolf hunting and trapping is necessary to improve whitetail numbers in the northern part of the state.

He also says deer hunters say the wolf numbers have increased significantly in northern Minnesota and as a result deer numbers have fallen.

What Anderson fails to mention is that the whole "wolves are eating all the deer" is not only an old argument by the anti wolf crowd but it is also unproven. In fact, what has been proven is

2. The wolf population is dependent on prey availability. The more deer we have the more wolves we'll have. The less deer we have the less wolves we'll have.  Yet you NEVER hear the Minnesota Deer Hunters Association talk about lowering deer numbers when lower deer numbers would result in two things - it would lower the wolf population and it would help our moose. 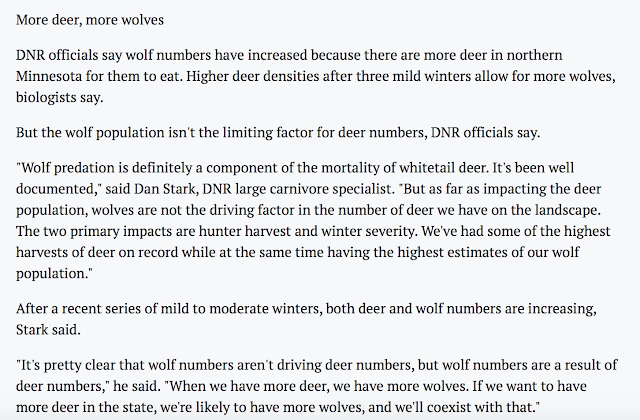 The reason our moose are dying is because we have too many deer in northern MN spreading brainworm.

Deer Have Direct Role in Death of Minnesota Moose

Back to the number of deer in Minnesota and how it impacts the wolf population. The proof is in the numbers.

If LESS wolves mean MORE deer then why when we spent three seasons killing off wolves, 922 wolves to be exact, did the deer harvest go down? The years we had the most wolves we also had the most deer killed by hunters.

3. Research has proven over and over that wolves are not decimating the deer population. Do Wolf Tracks and Few Deer in Your Fall Hunting Area Mean What You Think They Mean?

Sadly, delisting will happen regardless of what the science and the majority of Americans say. Wolf advocates need to continue countering the wolf hysteria and propaganda with facts and supporting organizations that lead the fight to protect wolves on the ground and in the courts.

Organizations that fight for wolves: