WHAT DOES THE DNR DO TO EDUCATE THE PUBLIC ON WOLVES? 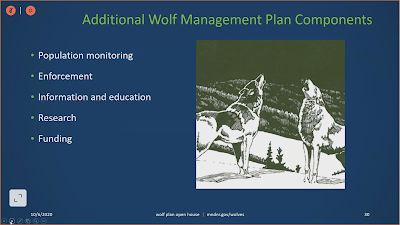 Tonight I sat through the wolf information webinar hosted by the Minnesota Department of Natural Resources and one of the statements made by Dan Stark, the DNR's Large Carnivore Specialist, is that part of what the DNR does as part of their wolf management plan is population monitoring, enforcement, information and education, research, and funding. He said information and education was what people learn at the Wildlife Science Center and the International Wolf Center. Since the International Wolf Center (IWC) and the Wildlife Science Center (WSC) are not owned or operated by the Minnesota DNR I asked the following question:

The response I received was basically what I already knew which is...nothing. Dan Stark said they update the status of the wolf and discuss wolf management on the DNR website. He also said he wants to foster a relationship with organizations that already educate the public and doesn't think the DNR needs to duplicate that. At that point Glenn DelGiudice, DNR Moose Project Leader, jumped in to say the DNR collaborates with the Wildlife Science Center and the Minnesota Zoo but didn't elaborate to say what the collaboration looks like.
So now we know that although the majority of Minnesotans want to protect wolves and are against wolf hunting and trapping the DNR does very little to educate the general public on wolves. They simply rely on their website to educate the public except their website isn't always up to date. For example: They didn't update their wolf mortality tab for 3 years. I contacted Dan Stark earlier this year to let him know the website still only listed mortalities prior to 2017. They recently updated it to include limited information about 2018-2019 and right now they have information for December 4 & 5th of 2020 and those dates haven't even come yet. Are they predicting a few wolf deaths in December? Today is October 6, 2020. 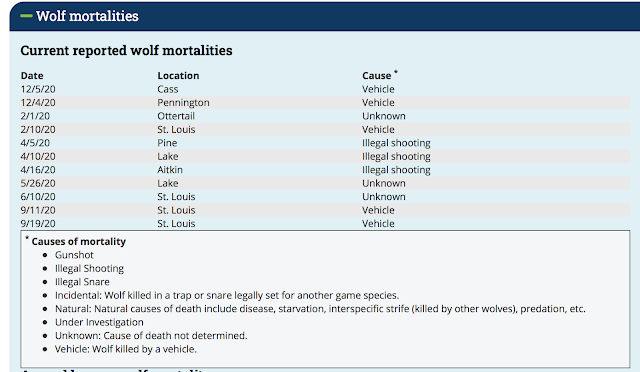 They also made it clear they rely on the IWC and the WSC to educate people on wolves, both organizations whose founders are proponents of delisting, wolf hunting and trapping.
Wolf education should focus on dispelling myths about the species by teaching the public about wolf behavior, pack structure, hunting habits, and their importance in maintaining healthy ecosystems. This can be accomplished through the following:
presentations at public and private schools
presentations for girl scout and boy scout troops
pamphlets distributed to various organizations
presentations in communities in wolf country
presentations at libraries or at public events
presentations at the DNR booth at the Minnesota State Fair
There are numerous ways the DNR could educate the public on wolves and they know it's possible because they educate groups on fishing, hunting, and how to use a gun all the time. They reach out to organizations to push these events.
Example: 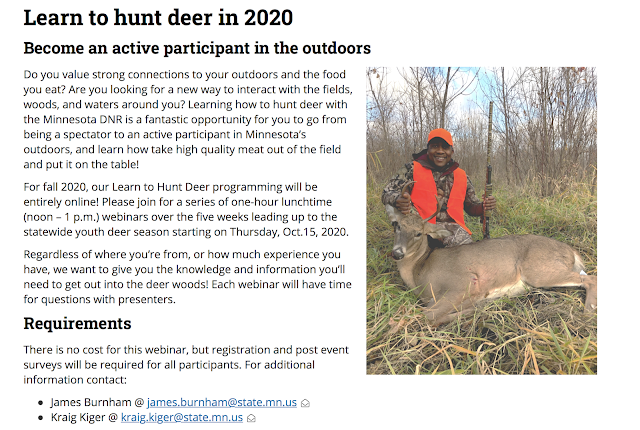 Why do they only open survey's and sessions like the one tonight when it comes to wolf management issues?
Where is the basic wolf education they could provide on a regular basis? Most people in Minnesota don't even know the International Wolf Center or Wildlife Science Center even exists. I didn't know about IWC until 2011 and the WSC until 2012 and I was born and raised in this state and involved in wildlife activism since the early 1990s.
And as for who Glenn DelGiudice says they collaborate with.  The Minnesota Zoo is not truly the best educational facility. Studies have shown they (zoos) do little to truly educate anyone. One study done by the Society for Conservation Biology found that in over 2,800 children surveyed following visits to a London Zoo 62% showed no positive learning outcomes.
Next, let's talk about the other place Glenn DelGiudice says the DNR collaborates with - The Wildlife Science Center.
Peggy Callahan is the founder of the Wildlife Science Center and she is a supporter of wolf hunting and trapping. Back in 2012 during the wolf hunting controversy she told the Star Tribune that "science has left the room" and "I suspect, however, that the real reason behind the opposition to the hunt has nothing to do with science, and is the motivation behind the string of lawsuits to stop the delisting of the wolf over the past decade-plus. Some people love wolves so much that the thought of one dying is not simply distasteful, it is abhorrent, unbearable."
Funny that she stated opposition to the wolf hunt by the public was purely emotional when in 2015 there were 70 wolf biologists and wildlife ecologists who signed onto a letter opposing wolf delisting.  LETTER
The reason they signed that letter is because they know the outcome is hunting and trapping. Were they being emotional too?
Peggy Callahan fully supports wolf hunting, she stated this fact in interview below recorded in 2011.
FULL VIDEO HERE
Dr. Michael Fox, veterinarian and author of Soul of the Wolf, wrote THIS ARTICLE about Peggy Callahan being pro wolf hunt.
Peggy Callahan has such a great relationship with the Minnesota DNR that they evicted her from land she was leasing back in 2016.
Minnesota Wildlife Center feuds with DNR after eviction notice.

Interesting...
Will the new wolf management plan contain any REAL information on educating the public or will it just be more collaborations with pro wolf hunting individuals and false information on a website?
Time will tell.