U.S Secretary of the Interior, David Bernhardt, recently came to Minnesota and stood on the grounds at the Minnesota Valley National Wildlife Refuge in Bloomington to announce the removal of gray wolves from the Endangered Species List from across the lower 48 states.  This wasn't a surprise to wolf advocates, we knew it was coming, we just weren't prepared for the announcement to happen a week before the presidential election. Obviously the timing was a strange decision on the part of our government agency but under Donald Trump nothing is too bizarre anymore. 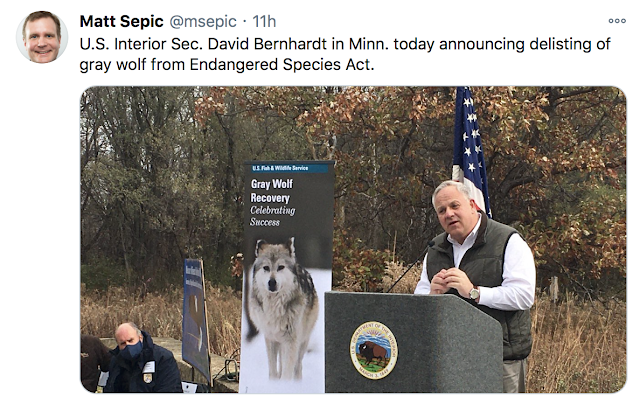 The decision to remove gray wolves from ESA protection is not based on science like the law requires so this decision will be challenged in court.

The Endangered Species Act requires US Fish and Wildlife Service (USFWS) make "biological decisions based on best scientific and commercial data available." Another requirement for delisting is for the USFWS to seek out independent scientific review of the information they used when making the decision to delist.

Source
The USFWS did pull together a panel of 5 scientists to review the scientific information used to determine if delisting of the gray wolf was warranted and they determined the agencies proposal was "full of scientific errors that misrepresent scientific consensus regarding wolf conservation and taxonomy." This is what one member of the panel had to say:

Summary Report of Independent Peer Review for the U.S. Fish and Wildlife Service Gray Wolf Delisting Review.
Why then would there be a rush to delist wolves across the lower 48 states? Well, at this point it is quite obvious.
1. The Trump administration has been in bed with extractive industries since he began his term as president and any endangered specie can stand in the way of logging, mining, drilling, etc...
2. His sons are big time trophy hunters.
3. Three of his top supporters are members of the National Rifle Association (NRA), Safari Club International (SCI), and the Sportsmen's Alliance. 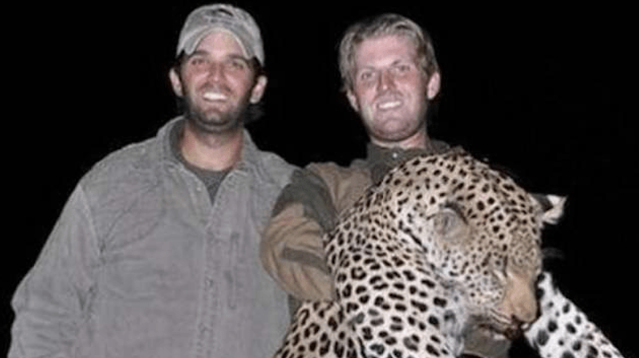 Just look at who he made the Director of USFWS. Aurelia Skipwith.
Aurelia began her career working for Monsanto, one of the "Big 6" biotech corporations responsible for major environmental damage and pollution around the world. They are most well known for the creation of controversial genetically modified foods, the herbicide "round-up" and of course Agent Orange, the defoliant used by U.S. troops in the Vietnam War.
Monsanto Corporate Rap Sheet

Aurelia has a long history of being connected to groups who are opposed to protecting endangered species.

Who Is Aurelia Skipwith? Trump's Nominee to Lead Fish and Wildlife Service Linked With Groups Opposed to Protecting Endangered Species

Safari Club International, the worlds largest trophy hunting organization, has been behind the push to delist gray wolves and other endangered species for years and they work overtime to weaken the Endangered Species Act.

SCI proudly boasts about their being #1 in the fight to delist gray wolves.

As for David Bernhardt, he is a former agriculture and oil lobbyist. Once elected he immediately went to work on weakening the Endangered Species Act.  Part of his extensive anti wildlife resume is being a legal advisor for mining, timber, oil and gas companies.

On April 15, 2020 the Dept of the Interior's Inspector General opened an investigation into David Bernhardt's alleged ethics violations. Apparently he lied to Congress, has numerous conflicts of interest, and possibly met with former clients while he was in office.

The wolf being delisted is just more evidence that we are living under anti science leadership in the United States but we must continue to stand strong and keeping fighting for the voiceless animals that need us.