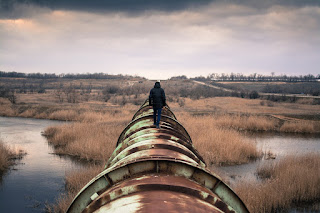 I have been left out of many attempts to stop damaging actions on the state level as I urge people/groups to not go down this road.

To the best of my knowledge, nothing has ever been won by us through legal lawsuits on ER. If I am wrong, please inform me of what we have won with MEPA ER. To many professional environmental groups, the MEPA is the "holy grail" and if you bad mouth it, you will be shunned by many environmentalists as I have.

I have been involved in a number of legislative struggles over the past 25 years and since the passage of the MEPA I have witnessed numerous MN legislators chip away every year at MEPA.....from weakening restrictions on numerous issues from hog feedlots to ethanol plants. Two recent examples are Line 3 and Polymet.

Example; when you go with ER, who does the environmental review? In the case of Polymet, they hired Brad Moore (former director of MN PCA and assistant director of the MN DNR) did the ER for Polymet. When an ER was done on a proposed ATV trail, who did the ER? Answer: The MN DNR (who wrote the trail plan.) You do not have to be a genius to see that this is nothing more than assigning the fox to guard the hen coop!

The best anyone can expect from ER in MN is that the DNR or MPCA will tweak a few things in the plan but the projects still go through.

The alternative is the long hard road of creating and passing legislation. I became involved with restricting OHV's in state government and many St Paul lobbyists told me at the outset we'd fail....we didn't. From 1998 to 2003 we worked our butts off in St Paul but we finally succeeded in 2003 with a DFL controlled Senate and a GOP controlled House and a GOP Governor....all passed and signed the most comprehensive bill ever to pass concerning statewide use of these machines and we had DFL and GOP authors. We sent thousand of emails and phone calls to state legislators and committee members, car pooled people to St Paul to speak on behalf of protecting public lands, used photos from ATV websites of them immersed in mud and used our heads. It ain't easy but there is no alternative. I wouldn't give you 2 cents for MEPA environmental review!

I detest all the bullshit in government but it's the only possible route to success.....OH! I might add that I believe it's unfair to equate law making to sausage making....I like sausage and its unfair to sausage makers. 🤓

Barry lives off-grid in the Mississippi Headwaters Country of Northern Minnesota. He is a public lands and wolf advocate, local historian, author of the book Teachers in the Forest, and founder of the grassroots organization Jack Pine Coalition.