I have to address the most recent Star Tribune article  about gray wolves in Minnesota and the possibility of another wolf hunting season. In the article there are two quotes which intend to mislead the public about wolves. Here are the quotes:
"Minnesota's recovery goal was to build up a population of 1600 wolves, a number surpassed years ago."
"A healthy ecosystem needs healthy wolves, but the population is just too high. We need to be allowed to manage it properly."
Why is it implied we should care about the wolf population? Well, the rise in wolf numbers has always been a large part of the anti wolf propaganda in Minnesota and elsewhere. Despite decades of research and observations showing none of this is true, the delusional comments you most often hear or read from the anti wolf crowd are:
1. The wolves are going to overpopulate to a point they start stalking and attacking our children.
2. Wolves are going to start taking over our cities.
3. Wolves exist in such large numbers they are decimating our deer population.
The anti wolf crowd has literally been saying all of the above since there was a bounty on wolves. They said it in the 1950s when wolf numbers were between 450-700, they said it in the 1970s when wolves were placed on the Endangered Species List, they continued to say those things in 1980 when the wolf population was 1,235, and they are still saying those things today when the wolf population is now 2,696.
In a New York Times article published in 1977 wolf researcher Dr. David Mech said about the city of Ely and surrounding areas "There is a vigilante group that kills wolves whenever possible and puts the carcasses on other people's doorsteps with notes arguing that wolves destroy deer that should be protected by hunters." The vigilante group Mech was likely referring to was the Sportsmen Only Solution (SOS) who claimed responsibility for leaving a dead wolf on the steps of Voyageur Ntl. Park headquarters in the same year.
In 1977 we had 1,235 wolves and SOS felt there were too many.
In 2009 social media was full of wolf hysteria. The following was a response someone gave when they were told to move out of wolf country if they hate wolves so much. They raised their children to be afraid of wolves. Their children are likely some of the people today who advocate for a wolf hunt. They were so terrified of being attacked by wolves and here we are, 12 years later...

and as of today no children have been eaten, we have an estimated 950,000 deer, and with nearly every individual person in America owning a cell phone there seems to be a lack of photo or video evidence of wolves taking over cities. In fact, there's never any photo, video, or other physical evidence or research to back up anything the anti wolf crowd claims
The following wolf population screenshots taken from the Minnesota DNR website. 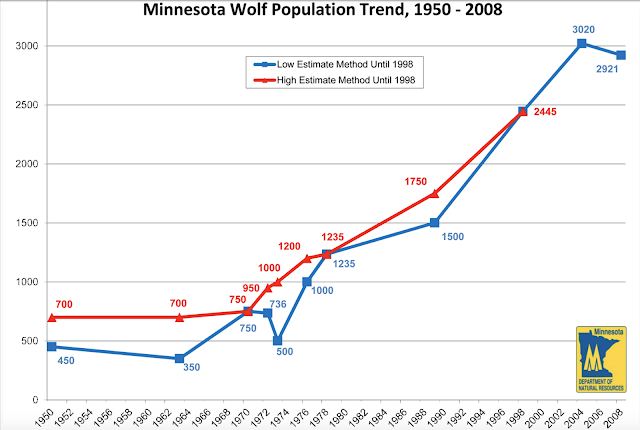 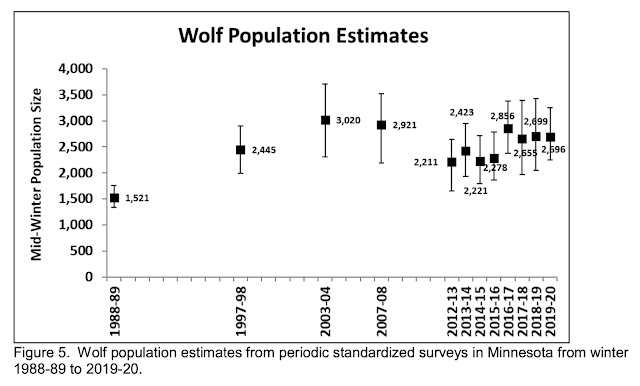 The whole "wolves are overpopulating" propaganda is used to push for wolf hunting and trapping. It worked relatively well for the anti wolf politicians and trophy hunters back in 2012-2014 but the few Minnesotans that believed their lies back then have learned a lot since that time and aren't so easily convinced anymore that wolves are a threat, so what do the politicians resort to now? Well, some of them cling to the old ridiculous talking points about deer and personal safety but many just continue to repeat "overpopulated" and "they need to be managed." When they do this they repeat the 1600 number as if it gives weight to their argument, but it doesn't.
On January 5, 2012 the Minnesota DNR Wolf Briefing said "The Minnesota Wolf Management Plan (2001) identifies a minimum statewide winter population goal of 1,600 wolves; there is NO MAXIMUM POPULATION objective and wolves are allowed to occur naturally in suitable wolf habitat THROUGHOUT THE STATE." Dan Stark, large carnivore specialist for the DNR, repeated that information during the Fall 2020 wolf webinar when he said "There's not a maximum population goal. Wolves are allowed to occur naturally throughout the state and wolves can occur in places that you know, it potentially could expand the range or increase in number, but we haven't seen that happen you know to the same to the same degree that occurred from the late 1970s to the late 1990s. The population overall and the distribution of wolves has been relatively stable and uh so they’ve pretty much filled all the the areas that they're likely gonna occur in Minnesota and we don't expect that there's going to be a big increase or a significant increase in in the number of wolves, and I think you know as we presented in the the summary it's been pretty closely related to the amount of prey available so um as deer populations fluctuated it's likely gonna you know influence how many wolves we have."

During that same webinar John Erb, a research scientist for the DNR, said “and on the question of the number 1600, that number is not a management goal it was based on the federal recovery goal that was 1,251 and we set sort of a number that was a buffer above and it was intended to be a number that if the wolf population approached that it was sort of a red flag for us to say we need to figure out what's going on and try and do something to to get that number up above that so it wasn't a management goal, we weren't aiming for 1600 it was sort of the number that was a red flag that we need to take a look and figure out why it's approaching there and get it back away from that number”
Regarding the deer. The record highest deer harvest in Minnesota was back in 2003 with 290,525 deer killed by hunters. At that same time our wolf population was also at its highest at 3,020. According to John Erb, wolf research scientist for the DNR, “deer are the big drivers of the wolf population. When deer numbers go up, wolf numbers go up."
Minnesota's deer population over the past 6 years:
2020 - 950,000
2019 - 935,000
2018 - 960,000
2016 & 2017 - 1,000,000
2015 - 850,000
2014 - 800,000
The push for wolf hunting and trapping in Minnesota is about recreation and nothing more.
Dan Stark also addressed this in the wolf webinar after someone asked about livestock depredation increasing after hunting wolves and whether wolf hunting reduces conflicts. Dan said "You know, that was not the intent of our wolf season here in Minnesota. Like we manage many other furbearer species, it's to allow recreational hunting and trapping of those species and assuring that we don't have long-term negative impacts on the population so we closely monitor those populations and make adjustments to seasons and regulations and the take of those animals so that they don't cause a long-term decline."
The statement about wolf hunting and trapping being about recreation and not population control also isn't new. It was stated in writing by the MN DNR in their response to the petition for rule-making change that they wrote before the first wolf hunt in 2012. In the petition they wrote "we can manage wolves for all interests like we do for the North American black bear, whose status in Minnesota was once similar to the wolf, but now represents a valuable resident of Minnesota that is highly appreciated for its esthetic, ecological, and recreational value." Not at anytime does the DNR say that wolf hunting and trapping is for controlling the wolf population.
Click HERE to listen to Dan Stark and John Erb talk about the wolf population. John Erb's comments start at the 11:23 mark (1600 minimum population comment, and Dan Stark's comments start at the 40:00 mark (population goal comment), and 8:04 mark (wolf hunting for recreation comment).
The truth is it doesn't matter how many wolves we have, whether we have 400 or 4000, any number is too high for the anti wolf crowd and any number will be used as an excuse to hunt and trap.
I think this Freudian slip in an article from 2011 says it all but we can't let that happen.

There are currently two bills before the legislature to prohibit wolf hunting and trapping in Minnesota.
House Bill 1498
Senate Bill 1144
Call your representatives and senators today and ask that they support the bill to prohibit wolf hunting, better yet, ask them to co-sponsor the bill. You can find who represents you HERE.
~Michelle Valadez
Michelle is a 6th generation Minnesotan. She's been a wildlife activist for over 25 years and founded MinnesotaWildlife.org to educate the public on issues related to wildlife and encourage local activism in order to protect wild creatures and wild places in Minnesota.