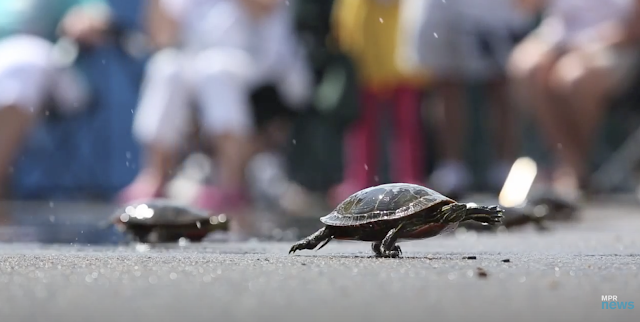 In a little town called Nisswa - population 1,817 - there is an event held annually by the Chamber of Commerce called the Nisswa Turtle Races. This year the races will begin on June 2nd and be held every Wednesday through summer.

Nisswa turtle racing, founded by residents in 1963, is a favorite small town event. According to Craguns.com it was boredom that lead to the idea that racing turtles would be fun and entertaining. Each year turtles are taken out of the wild by organizers and then brought to a parking lot in downtown Nisswa where participants can line up and select their turtle from the bunch. The turtles are set down on hot asphalt and repeatedly splashed with water to get them moving towards the finish line. The organizers claim the turtles are then returned to the wild when the race is over. What the organizers don't tell anyone is what turtle racing does to turtles.

First, let's look at what is before the Minnesota legislature right now.  Currently before the House of Representatives is H.F. 387, a bill that would permanently end commercial harvesting of turtles in the state. Turtles in Minnesota face numerous threats to their survival that make a commercial harvest not sustainable. Some of those threats include; climate change, habitat loss, disease, and being run over by cars. Turtles aren't like many other species in that they don't reproduce quickly. Turtles are a very long-lived species and they can take a decade or more to reach maturity, once mature the females will produce eggs for many, many years but if she's killed before reaching that potential that means a loss of years and years of new turtles. Banning commercial harvesting should be just one step in the process of saving our turtles. The next step would be to stop taking them from the wild for entertainment and here's why that matters...

This is what the turtle's face at the Nisswa turtle races.

1. Volunteers are responsible for gathering the turtles that will be used in the races. The turtles are found in creeks and lakes and they are returned there when turtle racing season is over. From June until August those turtles are kept on-hand.

According to John Kleopfer, a reptile and amphibian specialist with the State Department of Game and Inland Fisheries in Virginia, turtles used in races are "the walking dead." He said that "turtles taken from the wild and not quickly returned to the same spot they are captured have extremely low survival rates."

2. Participants go to the parking lot to pick out a turtle. There are female and male, young and old, small and large turtles to choose from.  All of the turtles selected for racing have survived the odds in the wild. There are mature turtles that will never see their breeding potential realized and it's highly likely there are pregnant turtles in the bunch as well. This contest starts in June and that's the same month pregnant turtles are laying eggs, which means a loss of countless future turtles for Minnesota.

3. The race is held in a parking lot. Turtles are being forced to run along the hot asphalt all summer long.

4. Some participants bring their own pet turtles, this is an addition to the organizers keeping a large number of wild turtles to choose from. The likelihood of disease to spread increases. Once the turtles are placed back into the wild they have the potential to infect others.

The following is a screenshot taken from MidwestWeekends.com about one Wednesday at the Nisswa event.

5. The turtles are repeatedly handled. Since the majority of the participants at these events are children there is the high chance of turtles being dropped and injured. One couple who campaigned to get turtle racing banned in a small town in Arkansas had this to say in the ArkansasOnline.com about what they witnessed at one of these events:

Turtles have pain receptors just like humans. Their ability to feel pain extends to their shell also. Their shell is like a bone and if it's cracked it's painful.
Turtles are very easily stressed when there is change to their environment or their well-being which is why they urinate when handled by humans. Much like humans, a turtle's stress level is strongly linked to their immune system. In Wildlife rehabilitation facilities it has been noted that when stress is kept to a minimum a turtle recovers from injury and illness much faster than turtles exposed to high stress.
Like most wild creatures a turtle will often speed up when it is trying to flee from danger, which is what makes turtle racing possible.

Jen Riley, director of veterinary services at the Blue Ridge Wildlife Center in Boyce, VA says "Turtles urinate out of fear. When a turtle runs after it is placed on the ground it is running out of fear."

The above list highlights just a few major ways turtle racing affects turtles and unfortunately those events can also leave a lasting affect on children. Turtle racing does not teach children how to respect wildlife. A turtle race tells a child that it's ok to completely disregard what is best for wild creatures because as humans our desire to be entertained comes first.

There are 2 common reasons most small towns claim to hold these types of events.

1. To raise money for local non-profits.

2. To raise money for the local businesses.

The answer to #1 is - there are numerous ways to raise money for non-profits that does not involve torturing wildlife. Try a bake sale, sell t-shirts, do a walkathon...

The answer to #2 is - there are a number of creative ways to draw tourists to a town and generate revenue for businesses that doesn't involve the abuse of wildlife. Create a website, blog about your business, do press releases about activities in your town, take advantage of social media...

There is no reason to sacrifice the lives of hundreds to thousands of turtles to benefit our own.

Write the Nisswa Chamber of Commerce and let them know how you feel about turtle racing in Minnesota.  CLICK HERE