On April 21 of this year Minnesota Rep. Kelly Morrison (D) introduced a bill to prohibit the use of lead ammunition when hunting with firearms. You can read the bill HERE. Shortly after the bill was introduced articles began popping up across the nation telling the public that this bill was pushed by anti hunting advocates and will drastically alter hunting and destroy wildlife conservation funding. Nothing can be further from the truth.

Safari Club International (SCI), a trophy hunting organization that makes it their mission to stand in the way of wildlife protection legislation across the world, is leading the fight against banning lead in ammunition. Their top concern, they claim, is that banning lead ammo will make hunting unaffordable for the average hunter, but take a look at a Cabela's catalog, one of the top shops for hunting gear, and see what types of things hunters are able to afford. The cost of non lead ammo doesn't even compare to what most hunters are buying today.

In his book Deerland: America's Hunt for Ecological Balance and the Essence of Wilderness, Al Cambronne says "today's hunters spend the vast majority of their money on products that didn't even exist a generation ago. Although we somehow didn't realize we needed them, these items have suddenly become indispensable. We take them for granted and can barely remember a time when they didn't exist."

Here are some of the common things that most hunters purchase. The following prices are from Cabela's.

1. A handheld GPS device for downloading topography maps. The cost ranges from $200 - $800

2. Digital trail cams. The cost ranges from $50 - $750. Many hunters choose to have more than one for scouting several locations at once.

Hunters also buy things such as scent blockers to conceal their odor and scent attractants to lure in target wildlife. Add that to the ammunition and firearm or bow that is needed to hunt. A modern compound bow can cost $1000. There's also the cost of things like tree stands which range from hundreds to thousands of dollars. Some hunters go the extra mile and buy land to create food plots for deer. For such a hunter there is the cost of seed, fertilizers, farm equipment, tillers, rakes, etc... and ATV's. ATV's are also often used by your average hunter even when they don't have a food plot. Cabela's shows the cost of a new ATV ranging from $3000 - $8000. Bear hunters are big users of ATV's. They also use a lot of bait. Bait can cost anywhere from under a $100 to several hundred dollars, depending how much is purchased and how often bait sites are refilled. Plus, since most hunters aren't hunting outside their back doors, all of the above gadgets and equipment get added to the cost of travel and lodging.

*Yet, they complain that non-toxic ammo is just too darned expensive for them.

Regardless of the number of gadgets hunters can afford, SCI and other hunting groups maintain that non-lead ammo is so expensive it will have a negative impact on the average hunters pocketbook, therefore, if less people are hunting because of the cost of non-toxic ammo then that will lead to less money for conservation. Field & Stream has even jumped on board objecting to the ban. They went so far as to claim "environmentalists frequently reference an inconclusive study to bolster their claim of lead's toxicity to animals." Field & Stream often contains articles objecting to a ban of lead ammunition and fishing tackle.

So let's address this in two parts.

Here is what some hunters have said about it.

His conclusion "So, will the cost of non-leaded ammo prevent people from hunting? I don't think so. If I buy the cheapest ammo for my .270 Winchester, I'll save money with lead, but if I buy anything at midrange prices, I won't notice a difference." 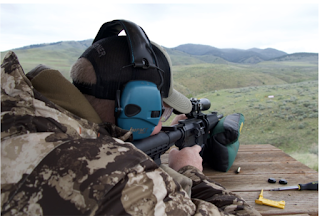 Here is what another hunter had to say about non-lead ammo. 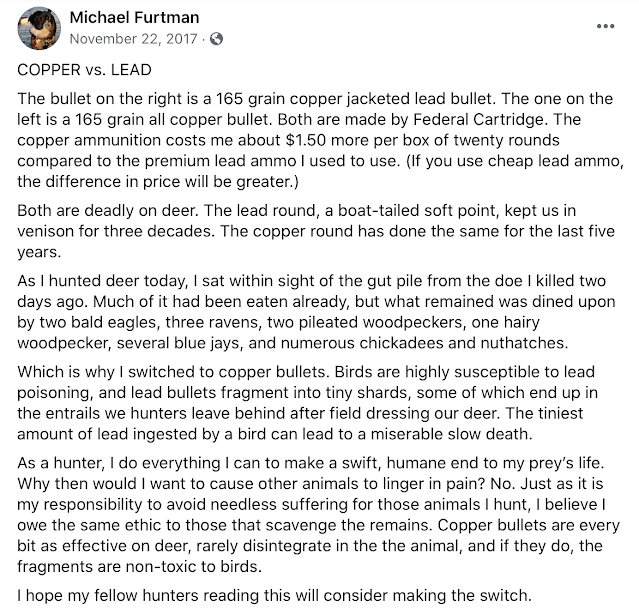 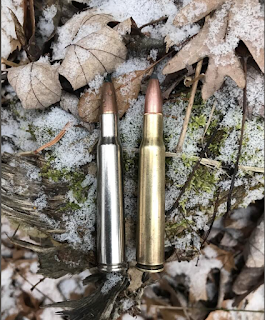 And from another hunter 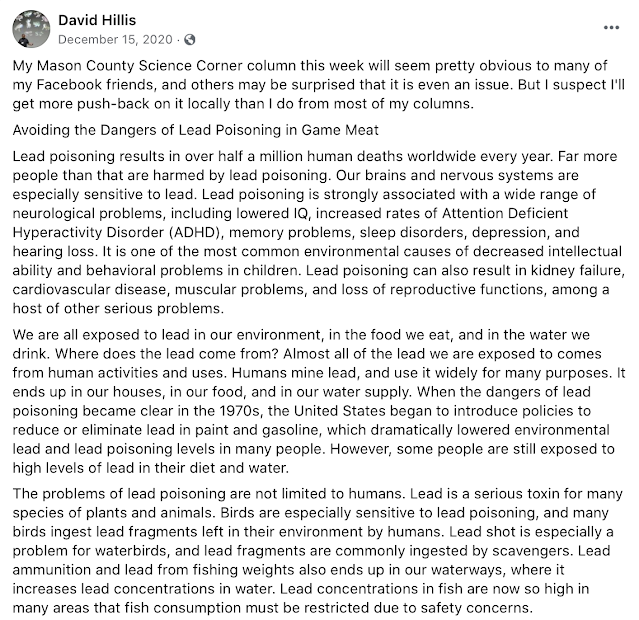 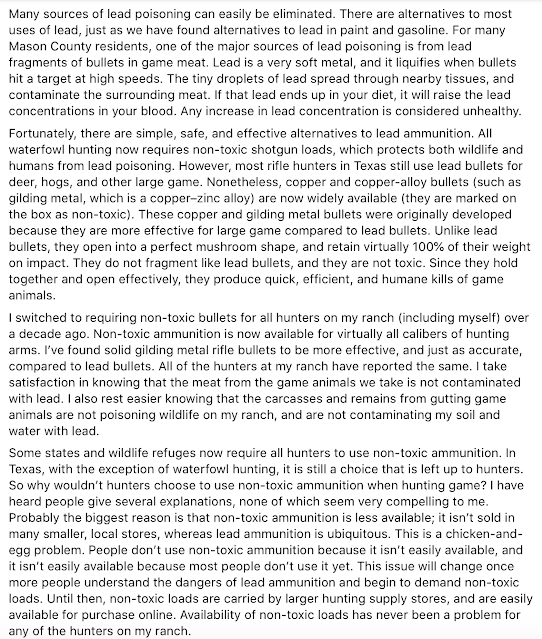 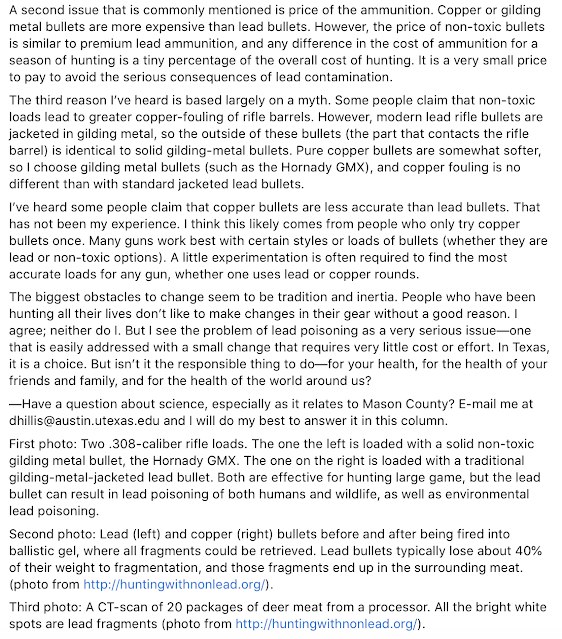 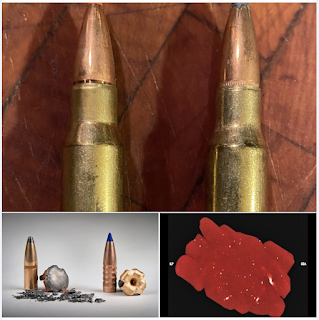 The dangers of lead hunting ammunition and fishing tackle have been extensively documented.

The Persistent Problem of Lead Poisoning in Birds from Ammunition and Fishing Tackle. (S.M. Haig, 2014)

A Review and Assessment of Spent Lead Ammunition and its Exposure and Effects to Scavenging Bird in the United States (N.Golden, 2016)

Here are two hunters debating the issue on the Field & Stream comment board. 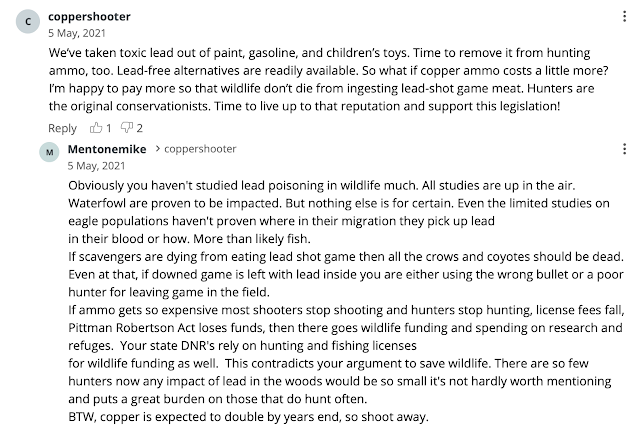 According to Mentonemike all studies of lead toxicity are up in the air, which is absolutely untrue. It's either what he/she bought into from Field & Stream or they are just being willfully ignorant.
Here's what's happening in nature. According to the Raptor Center of Minnesota "85-90% of eagles that are brought in have some amount of lead in their system."
"It's a common diagnosis at the Raptor Center. From the beginning of deer hunting season through January, the center will see 30 or more eagles suffering from lead poisoning. Due to the brain damage caused by ingesting lead, most of them don't make it."
More Deer Hunting Means More Lead Poisoning In Eagles, the Raptor Center Says
Below is a bald eagle with lead poisoning 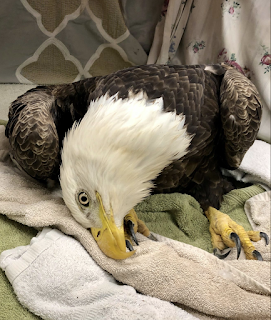 Photo taken from the Blue Ridge Wildlife Center Facebook Page
Although the following has to do with lead tackle and not ammunition, it's still observable evidence as to what's happening when wildlife ingests lead.
"The Vadnais Lake Area Water Management Organization is continuing to see evidence of lead poisoning in trumpeter swans found dead on waters where lost fishing tackle lies in shallow areas."
"In the latest case of a swan found dead Feb. 3 on Sucker Channel, pathologists at the University of Minnesota last week found a silver, metallic sinker inside the bird during a necropsy exam. A report form the university's Veterinary Diagnostic Lab said internal lesions in the swan suggest lead toxicity."
"Dawn Tanner, the conservation biologist for the watershed around Vadnais Heights, said this would be the fifth confirmed lead poisoning of a trumpeter swan in the area in the past 14 months."
Trumpeter Swans Continue to Die in Vadnais Lake Area Waters; Lead Suspected
Minnesota has what is called the Hunter Harvested Venison Donation Program. This allows deer hunters to donate deer carcasses to food banks, food shelves, and feeding programs. The Program requires all firearm harvested venison to go through an x-ray scan and any meat found to contain lead is discarded.
In 2021 a report showed that "over the past 10 years, 94,782 pounds of venison have been donated by hunters to help feed the hungry. But of that, 6,735 pounds, 7.1% had to be thrown out because it was contaminated with lead." That means over those 10 years it's likely a lot of lead tainted gut piles entered the system of wild scavengers.
Fortunately there are hunters that support the use of non-toxic ammunition. Like Paul Hansen from Wyoming. He says "only about 5% of Americans hunt, but about 95% support hunting if it is conducted ethically, safely and as humanely as possible. Using nontoxic ammunition is the right thing to do for our families who eat game, for wildlife scavengers and for the reputation of hunting and hunters."
If  hunters care about their reputation and want to continue claiming they do a great deal for wildlife conservation then don't just make the switch to non-toxic lead. Stand up to groups like the Safari Club International. Openly support the ban on lead ammunition, talk about it to friends and family, post about it on social media, write to and meet with elected officials. A handful of hunters making the switch voluntarily to non toxic ammo won't create the change we need against the large majority of hunters that refuse to stop using it.
Hunters can help fund wildlife conversation through hunting and fishing licenses until hell freezes over but a true conservationist contributes money without expecting anything in return, they don't just talk about respecting wildlife they physically show they do with their actions. We see the names of the same hunters in Minnesota over and over again that truly work to protect wildlife, now let's see some new ones add their name to the list.
To learn more, visit the following:
Friends of Minnesota Scientific and Natural Areas
~Michelle Valadez