I make no secret of the fact I've long had a problem with the International Wolf Center (IWC) and the Wildlife Science Center and here are some of my main reasons why:

1. The Safari Club International, one of the largest trophy hunting organizations in the United States that always stands in the way of creating laws to protect wild predators like wolves, mountain lions, grizzly bears, etc... is a charter member of IWC.

See: Based on arguments presented by the Safari Club International (SCI) the Minnesota Court of Appeals today dismissed a legal challenge to Minnesota's wolf harvest. 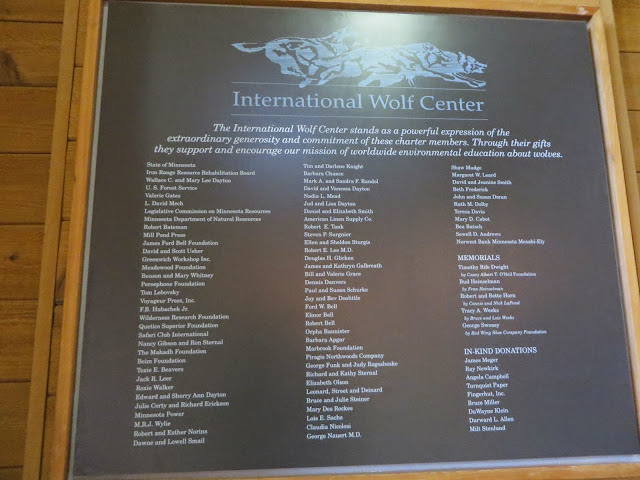 2. Back in 2010 Dr. David Mech, the founder of IWC, wrote a paper titled "Considerations for Developing Wolf Harvesting Regulations in the Contiguous United States." In it Mech discusses how and when it's best to kill wolves. Here are some of the quotes from his paper.
"Harvesting many wolves is not always easy"
"Deliberately seeking to shoot a wolf is even harder than going out to see one."
"Trapping is also very difficult."
Dr. Mech was wrong. Hunting and trapping wolves has been quite simple. Before each wolf season ended hunters and trappers met their quota. In fact, they went over quota. Mech in numerous interviews maintained that wolves were difficult to hunt and trap. Prior to the first wolf season he was even featured in a video on the DNR website saying the same.  The video has since been removed. Mech no longer talks about how difficult it is to kill wolves.
Season 1 - 400 target, 413 killed
Season 2 - 220 target, 237 killed
Season 3 - 250 target, 270 killed
"After the novelty wears off in a few years there might be little incentive for hunters in most states to deliberately seek wolves."
Dr. Mech has stated more than once prior to the first wolf hunting season that hunters would tire of killing wolves after the first couple seasons. Not only were trophy hunters not satisfied with killing a total of 922 wolves in three years, they were furious when wolves were placed back under federal protection and now that wolves are off the endangered species list again hunters are begging for another wolf hunt.
"Conceivably, hunters in some states might develop methods for taking wolves more efficiently. Possibly hunters who currently use dogs could also train dogs to track wolves. However, wolves kill and eat dogs so probably few hunters would risk trying this."
Dr. Mech said that few would risk using dogs to hunt wolves yet that is exactly what Wisconsin hunters did this year when they slaughtered 216 wolves, going way over the quota of 185.  Cruel wolf hounding started in Wisconsin back in 2013 and continues to this day.
"Maximizing public acceptance of wolf harvesting will be hard no matter what taking techniques are used. Nevertheless there are some considerations that can reduce public opposition. The primary consideration is to open the season only after most pups have reached adult size and are no longer readily identifiable as pups, usually about November. Killing animals that are obviously pups will invite much revulsion, even by sportsmen. Referring to these grown pups as young-of-the-year would help."
"A similar consideration that can be made toward the end of any annual hunting or trapping season would be to end the season before fetuses in gravid females are obvious. In most northern states that would be by 1 March, which also coincides with when wolf fur has lost its prime. Allowing harvest through February, however, would assist with wolf control by increasing chances that gravid wolves would be taken."
3.  In the October 21, 2012 Duluth Tribune IWC co-founder Nancy Gibson said that the International Wolf Center would not take a position on the wolf hunt.
4. Jim Hammill, who at the time was a member of the Safari Club International Foundation Conservation Committee, served as a board member at the International Wolf Center. He'd often write for the member magazine. In the Spring 2009 issue  he said "the ruling by a federal judge in Sept. 2008 to return Midwest wolves to endangered status had nothing to do with the court's concern for wolf populations in the Western Great Lakes distinct population segment. Likewise, the ruling had nothing to say about state management authority vs. federal oversight of wolves. Instead, the ruling was based on procedural weaknesses in the Endangered Species Act."
Jim Hammill subscribes to the outdated conservation model of saving wildlife for hunters to kill and he was allowed to influence members of the IWC with his trophy hunting agenda. Even today Jim still pushes for wolves to be under state management so they can be hunted even though a federal judge ruled in 2014 that the Great Lakes States (Minnesota, Wisconsin, and Michigan) failed to manage wolves responsibly.
5. The International Wolf Center volunteers and staff don't tell visitors the full truth about where their wolves come from.
Back in 2015 in an attempt to defend herself from public scrutiny over her wolf fur farm Terri Petter disclosed that Luna, a wolf at the International Wolf Center, was one of her wolves. This was significant since at the time Terri Petter, owner of Fur Ever Wild, was on the hot seat over the keeping and slaughtering of endangered gray wolves. She would eventually have to surrender her wolves.
Read deposition HERE
Read Petter Story HERE 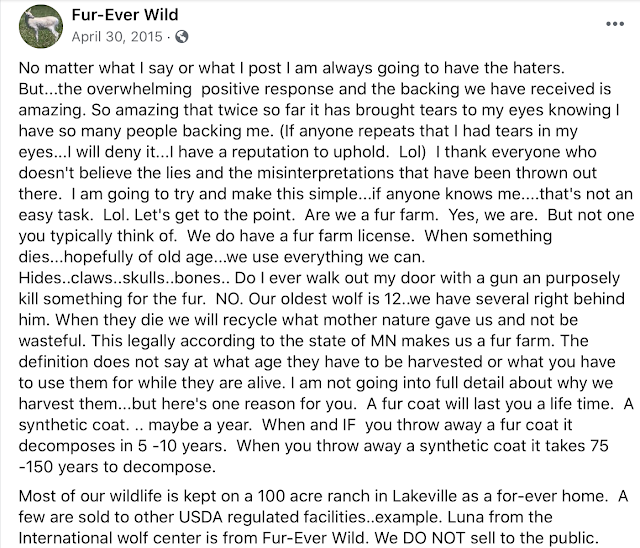 I contacted the Intl. Wolf Center to confirm what Terri Petter claimed regarding Luna.

Terri Petter used a broker to sell some of her wolves. It has been rumored that one of her brokers was Lee Greenly from the Minnesota Wildlife Connection. Lee Greenly is well known for repeatedly violating the Animal Welfare Act. Most notably is the time he took country singer Troy Gentry to the Minnesota Wildlife Connection 80 acre enclosure and allowed him to kill one of his bears and pass it off to the MN DNR as a wild bear.
The International Wolf Center has not confirmed whether the broker they took Luna from was Greenly. They don't openly disclose which USDA licensed facilities their wolves come from but one things for certain, many USDA licensed facilities are very cruel to the animals they keep. Lee Greenly's Minnesota Wildlife Connection is and Terri Petter's wolf fur farm was a USDA licensed facility.  It was only thanks to concerned citizens that Terri Petter lost the ability to continue running her wolf fur farm.

1. Peggy Callahan, the founder of the Wildlife Science Center, fully supports wolf hunting and trapping in Minnesota and referred to those who oppose a wolf season as "emotional." In a Sept 6, 2013 Star Tribune article Peggy said "the real reason behind the opposition to the hunt has nothing to do with science. Some people love wolves so much that the thought of one dying is not simply distasteful, it is abhorrent, unbearable." She proceeds to defend having a wolf season throughout the rest of the article.

According to Peggy the opposition to wolf delisting and hunting has nothing to do with science yet scientists wrote THIS letter in 2015, including Rolf Peterson who Peggy references in the Star Tribune article, stating they opposed delisting and hunting. Collette Adkins, the attorney from the Center for Biological Diversity that stands on the side of protecting wolves, has an MS in wildlife conservation. Since then more and more scientists have come forward to oppose delisting and hunting in various wolf states.

2. Peggy Callahan, in an interview with Lakeland Currents complained about the Humane Society of the United States and the Center for Biological Diversity trying to protect wolves from delisting and being hunted. She was very defensive of wolf hunters but critical and condescending towards wolf advocates.

3. Staff at the Wildlife Science Center has on several occasions sent wolves to live at the International Wolf Center.

Peggy was very supportive of everything the DNR said and did until they evicted her from the 7 acre Forest Lake installation where she housed her wolves and other wildlife. She was evicted for repeatedly violating her lease agreement. At the time the DNR said "the welfare of the animals is in jeopardy."

4. June 2021 the staff at the Wildlife Science Center removed a newborn wolf pup to bottle feed before transporting it to the International Wolf Center. The alpha female and other wolves started digging and escaped their enclosure to look for the puppy. While they wandered the streets one was shot and the other hit by a car and had to be euthanized. Two were returned to the center. The pup is now at the Intl. Wolf Center. 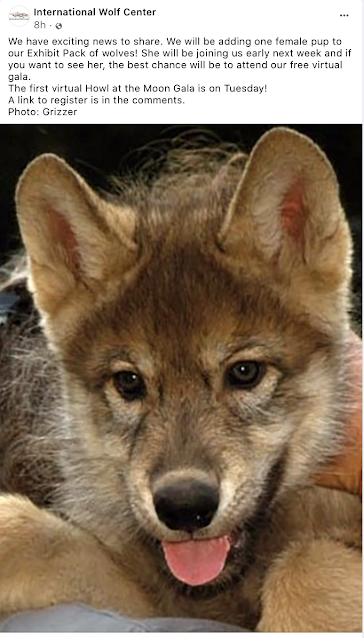 5. Peggy defended trapping wolves. She said the most controversial part of the wolf season was the use of traps but that the traps used were no different than what researchers use to study wildlife all the time. She even said the traps used on Isle Royale were exactly like the traps her trapper friends used to catch wolves.

Here's the facts: there are several types of traps used on wildlife; snares, conifer traps, foot-hold traps... all of them inhumane in my opinion. There isn't only concern about traps coming from animal advocates, wildlife researchers have also expressed their dislike for this approach to studying various species and because of this there are organizations, including scientists that have come up with other ways of researching wildlife to minimize injury and stress to the animal. In 2008 the American Medical Veterinarian Association covered this very issue.

5. Peggy Callahan participates in experiments on wolves claiming it is all in the name of science. From her work with David Mech on coyote wolf hybrids to extracting sperm from gray wolves for what she claims is ensuring the survival of the species.

In THIS article the removal of sperm is explained. "Callahan fired up the electro-ejaculator, which was developed by a man working with paraplegics coming back form the Vietnam War who wanted to store their semen" Asa said. The wolf's leg jerked with each electric shock. They collected five or six party cups of semen, none of them full. "For years the procedure was done manually" Callahan said.

I was mortified when the orcas at SeaWorld were being masturbated for artificial insemination purposes, I certainly don't believe it's acceptable for wolves.

Here's a thought - instead of extracting sperm to ensure the survival of gray wolves, just oppose hunting and trapping. It's so much easier.