WHICH ONE IS REALLY A NUISANCE?

This weeks conservation officer (CO) reports from the MN Dept. of Natural Resources (DNR) contain numerous reports of "nuisance" bears who are getting into people's garbage and bird feeders.

Bears live in Northern Minnesota. Sometimes they wander further south into central MN or on a very rare occasion they'll even drift even further down into areas like White Bear but the majority stay in the north country where the dense forest is. Everyone knows or should by now that bears love garbage and bird feeders. Every year the DNR urges residents in bear country to take their bird feeders down when bears come out of hibernation in March and asks them not to hang them up again until bears enter dens in September and October.

Removing a bird feeder isn't complicated, just takes walking out to the feeder and removing it.

Here lies the problem with humans. One word: entitlement.

Most people like birds, they enjoy watching them, feeding them, keeping them as pets, and they believe that birds can't survive without food handouts but the reality is birds really don't depend on humans for survival. Sure, feeding them is helpful when they are in need of the most energy and that would be during migration and during the bitter cold months when wild food is less available but in the summer when birds are nesting and raising their young they are more interested in eating insects and teaching their young how to forage for wild foods. Summer is also a time that bird diseases are more likely to spread. Warmer temperatures often allow for bacteria, fungus, and viruses to proliferate among birds.  The summer heat can also cause seeds and suet to rot and become moldy if a homeowner is not paying enough attention to clean the feeders and replace food regularly. If you have bird feeders hanging when you live in bear country you also have hungry bears to contend with and people are fully aware of this but choose to ignore it for whatever reason.

Every year conservation officers tell residents "take your feeders down, secure your trash" and every year a large number of people continue to ignore them but when a bear continually visits their feeders or rips apart their garbage bins they call the DNR to whine about it, demanding the bear be killed or relocated.

The MN DNR doesn't do bear relocation which means if the bear becomes too much of a "nuisance" or harms the person that keeps ignoring their conservation officer's request that they secure all food away from the bear, the DNR may resort to killing it to solve any future issues. So, who is really the nuisance here, the bear or the person?

Here's an example of what MN COs are facing when it comes to nuisance humans. 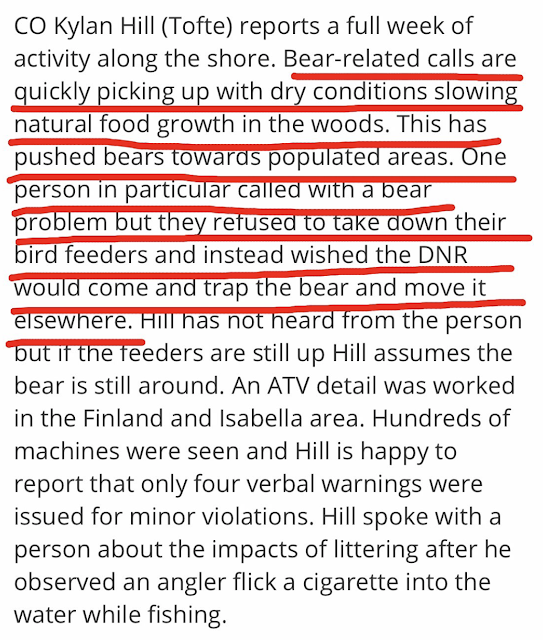 The above report was earlier in the season when the signs of drought were on the horizon. Yesterday the DNR stated we have now entered the drought warning phase. There have been numerous articles since Spring where the DNR has warned the public that bears are hungry and natural food sources are limited because of how dry it is so people need to remove bird feeders and store garbage cans properly.

Black bears at the bird feeder: why conditions in MN are ripe for...

Would they start listening if the DNR CO reports referred to the people as a nuisance instead of the bears? 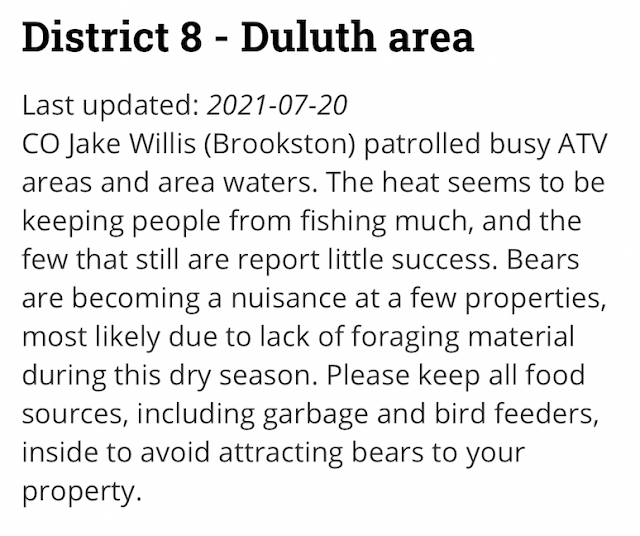 It should be changed to this:

People are becoming a nuisance at a few properties, most likely due to the fact they are not removing bird feeders and securing their garbage to prevent bears from following the scent while out foraging for the limited amount of wild food that's available to them at this time. 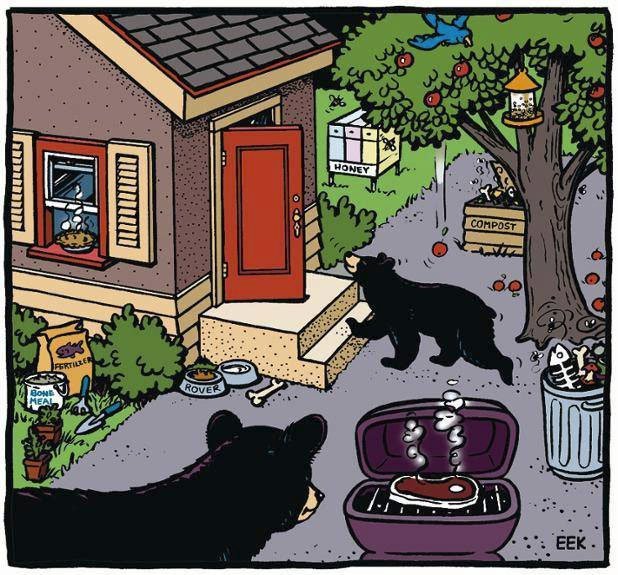