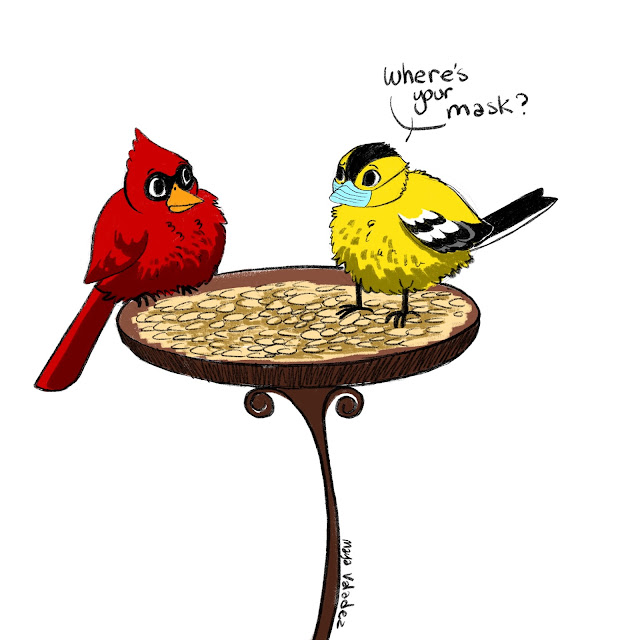 Recently Dr. Victoria Hall, Director at the Minnesota Raptor Center, asked the public to remove their bird feeders for a month or two as a precaution in preventing the spread of the avian flu. Currently there is zero evidence that the flu has spread to songbirds but according to Dr. Hall "because the science is unclear on the role of songbirds in this current H5N1 outbreak, one consideration is to not encourage birds to gather at places such as bird feeders or bird baths."

Dr. Hall also had this to say on the Raptor Center Facebook Page

Convincing the public to not feed birds, especially during spring migration, is next to impossible. Many people say they are willing to remove their feeders if there's evidence the avian flu spread to songbirds but one has to wonder how true that is for some. Consider chronic wasting disease (CWD). Even though people are aware that the state is struggling to prevent the spread of chronic wasting disease it didn't stop everyone from feeding the deer so the DNR had to issue a ban on feeding and attractants in certain counties plus threaten a $275 fine, and even with that the DNR spent a good deal of time this past winter fielding complaints about residents feeding deer despite the ban.

The problem for some when it comes to wildlife is pleasure trumps precaution for a lot of people. We all enjoy seeing wildlife in our yards so many people ignore the warnings and choose instead to rationalize why feeding is necessary despite what they are told. The Director of the Raptor Center in this case is asking for feeders to be pulled for just one or two months this spring. She didn't ask that they be pulled permanently and removing feeders for a month or two won't cause a major decline of songbirds, but not removing them possibly could if they do contract and become ill from H5N1. The removal of feeders is a precautionary step we are all being asked to take that could help songbirds and other avian species in the long run.

If you find that you can't stop ruminating over the belief that migratory birds will suffer irreparable harm because you stopped feeding them for a month or two this spring, please consider the following.

Many diseases are spread at bird feeders because birds come in close contact. The following are the most common diseases spread at feeders.

On April 4th, 2022 - Kare 11 News - Dr. Hall stated "in 2015 we had a lot of cases of highly pathogenic avian influenza, but it was mostly in commercial poultry operations. We did not see this level in wildlife. We didn't have a single case here at the Raptor Center and we've already seen seven in our first couple days of testing here. So very, very different and we're seeing a lot more illness and suffering in these guys when they catch it."

Source
If people are unaffected yet they can have the virus on their body and possibly spread it, then songbirds can too.
In 2010 researchers reported that "songbirds such as sparrows and thrushes carry various forms of the bird flu and could potentially spread the virus to pigs and poultry. The birds carried low-pathogenic avian influence -- the less dangerous form of bird flu -- but flu viruses can and do swap genes and mutate into more dangerous forms" which we've seen with covid.
So even if songbirds do not become ill or die from H5N1 it doesn't mean that they are not spreading it and making life more difficult for other avian species. It's also possible that this new strain has killed songbirds or it could mutate further and impact songbirds at some point.
According to the Audubon Society "this particular strain of HPAI appears to be more infectious and deadly to wild birds than previous versions, but gauging the pathogen's true impact on wild populations is more difficult than with domestic poultry, whose numbers are regularly recorded," says Andy Ramey, director of the Molecular Ecology Laboratory at the United States Geological Survey's Alaska Science Center. "There might be numerous birds affected, but only a small subset of the carcasses are actually collected and sent in for diagnostics."
Removing feeders is similar to the precautions humans have taken during covid. We can't put a face mask on a songbird so we are all being asked to hold off feeding for a month or two to let the scientists and wildlife vets collect more information on this virus to determine where wild birds may ultimately end up.
Remember that bird feeders are an easy supplemental source of food for wild birds, they get their food from a variety of places. If the feeder is empty they will find food elsewhere, they will not starve to death because you took your feeder down. Birds are incredibly adaptive and mobile.